In Highgate Cemetery, a forested hillside contains tumbling tombs. Star attraction is the grave of Karl Marx, beside a wide and gravelled path. This time, I came to hunt down other graves.

As a personal link, I once owned a house built into the mansion grounds of Lord Strathcona in Glencoe. His old tennis court was lost in the corner of our land, and exotic trees studded the garden. The nearby lochan was dug in the shape of a maple leaf, to help his Native Canadian wife feel at home. I pondered writing his biography. It would have been a tale of the making of modern Canada. Instead I visit his tomb, just inside Highgate’s entrance.

Jim Stanford Horn is only known to me by his gravestone; made like a book, with twin penguins linked by their wings. Jim Horn died in 2010, aged 34, before same sex marriage allowed the word ‘partner’ to become ‘husband’. At least that’s how I read this gravestone,  a tribute to reading and to a couple’s love. 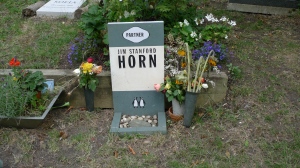 In a more abandoned zone of the cemetery I find the Australian painter Sidney Nolan. His stone is already weathered. Its inscription anticipates the arrival of his wife his wife Mary, but she had other plans.

Up above the path, a tiny gravestone remembers Douglas Adams. Still young and hugely successful, he moved to Santa Barbara, California. I envied him. He died soon after. Readers come and place pens before him, all ready in a stone tub, in case the writing urge sticks with him out there in the universe.

This was the first in a ‘Missing Bodies’ series you will find on this site: ten photos & short essays on ways of grieving, conceived as part of the Crossing Over research network.  Find links to the other nine below.

On my mother’s grave

Death on the River Lee

Will Self and the Creative writing PhD

The Making of Books

On my mother’s grave

A supernatural thriller & a stormy place

Corporations give fortunes to top lawyers to save them from justice